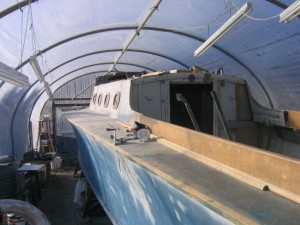 For many years home for 441 was the Stourport Yacht Club.

Norman Kidd bought the craft from the RAF in 1956 and took her from Boston, Lincolnshire through the canal system to Stourport on Severn, where she became a very well known local attraction at all river festivals.

At the age of 92 in 2004 Norman decide it was time to sell. Norman had kept 441 in the conditions that he had bought it from the RAF, which is why the craft is a totally original example of a 41.1/2 ft RAF Air Sea Rescue Launch.

After 8 amazing years yesterday 441 took to the sea again. With great trepidation we watched as she was winched out of her resting place and placed carefully onto a transporter for the journey down to Hythe Marina.  We were even more excited yesterday morning as we nosed her out to sea, opened the throttles for the first time in 20 years … and she took off, racing at over 30 knots towards the Isle of Wight.  An amazing couple of days… Jubilee Pageant next!

441 uncovered after so many years 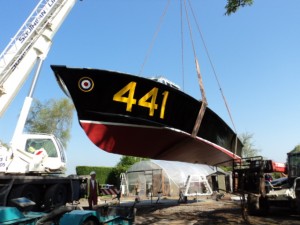 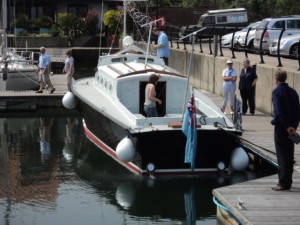 441 finally on the water

After 8 years restoration, 441 shows her paces on her first sea trial - exhilarating!