441 was built by the British Power Boat Company, Hythe, for the RAF as a fast craft to rescue airman ditched in the sea.

To provide a comprehensive coverage of waters around the British Coast, it was sometimes found necessary to use smaller, even tidal harbours.  It was obviously impossible to use any craft of the usual High Speed Launch size and so there were a certain number of Seaplane Tenders, usually the 41 ft Power Boat type, which became known as Air Sea Rescue Seaplane Tenders.

In May 1944, 441 rescued the entire crew of a B17 ditched in the Channel, the event was used by the British Power Boat Company in a promotional article in `The Aeroplane` magazine, May 12 1944.

441 played an active role in the Channel on D Day while at Sheerness and is known to have served at one of the ASR units on the Isle of Man, either 54 at Douglas or Peel or Ramsay. Peel and Ramsay were 54 ASR detachments in 1944.

441 was seen at Pembroke Dock in late 1944 early 1945 with the Sunderland Flying Boats, evidence of this can be seen in the Gun Tower museum Pembroke. A photograph shows her by the sea wall still with yellow numbers and yellow deck and superstructure.

In April 1945 the craft went to Warmwell, then Calshot in `46 and on to 111 MCU Lyme Regis in November 1946 patrolling the firing range in Lyme Bay off Portland Bill.

In October 1951 at 1109 MCU, 441 was decommissioned and in 1956 was sold to Norman Kidd who maintained total originality of the craft while using her on the canals around Stourport on Severn for the next 50 years.

In 2004 Alistair Walker bought 441 and embarked on a restoration to original specification.
Now in 2012 441 is ready for relaunch and proud to represent the RAF Museum at Hendon in the Queens Diamond Jubilee Pageant.

Men who served on her regarded 441 as a magnificent sea boat. 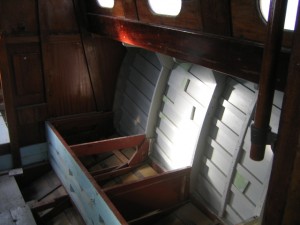